Greek Olympic standout Andreas Katzourakisreturns to Fight Club OC after a stellar KO against Chukka Willis back on our June 6th Fight Club OC show. Katzourakis now faces a tough Christian Aguirre at 8-3 (4KO’s) who recently KO’d Joey Alday on our Oct 6th Fight Club OC show. Katzourakis is a European and Greek Champion while Aguirre has fought some of the toughest in the fight game. This is a fight you definitely want to be in your seat for! Also fighting on 12/6 is fellow Greek countrymen Triantafyllos Mavidis who will be making his pro debut against Enrique Ojeda from Utah. 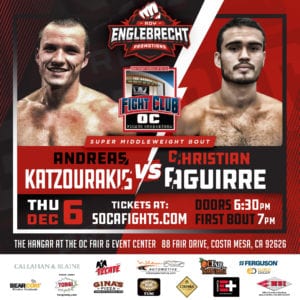 3-0 (3KO’s) Bakhodir Jalolov is a 2016 Uzbekistan Olympian who will be making his California pro debut on December 6th. This fight is set for 6 rounds in the heavyweight division.

MMA will also be in full force on December 6th with three BIG bouts from Fight Club OC MMA Matchmaker Mel Valenzuela. Samuelray Barrera from Buena Park will be making his MMA pro debut against Dejon Daniels. Daniels is from Anaheim so this will be a true OC matchup in the Super Middleweight division. 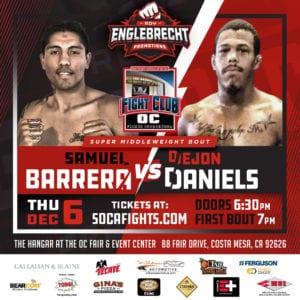 After a tough split decision loss on the FCOC October show Santa Ana standout Richie Palomino returns to face 2-1 Devon Brock. This fight was suppose to happen back on Oct 6th but Brock sustained an injury so prepare for fireworks! The final MMA bout of the evening will be La Habra’s Mark Matsumoto who is set to take on Ventura’s Jesse Newell at 7-3 (4Ko’s). 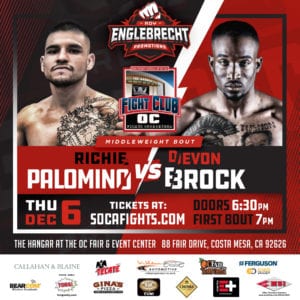 Less than 60 tickets remain to this spectacular end of the year show. All tickets are priced at $60 and available at www.socafights.wpmudev.host. Don’t forget about the great specials going on at Baja Blues directly next to The Hangar starting at 5:30pm.