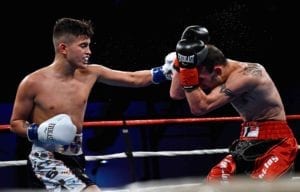 In the final installment of 2018 for Fight Club OC at The Hangar, OC Fair & Events Center, featherweight Sean Garcia (3-0, 1KO) outboxed Anthony Torres (0-2) en route to a shutout 40-36 victory in all three judges scorecards. Garcia, the younger brother of super featherweight contender, WBO #4, WBA #5, WBC #9 super featherweight ranked Ryan Garcia, showed flashes of his older brother but in a southpaw version. Torres was able to connect on occasion on Garcia’s somewhat porous defense but not connect enough to win any rounds to put the outcome in any question. Ryan Garcia, despite fighting on the Canelo vs Fielding undercard on December 15th, was in attendance to support his just 18 year old younger brother. 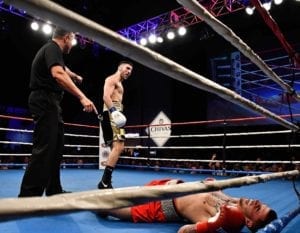 In other action, Triantafyllos Mavidis (1-0, 1KO), from Athens, Greece but now fighting out of Los Angeles, California, made his pro debut a successful one with a crushing knockout victory over Enrique Ojeda (0-2-1) in a scheduled four round super middleweight bout. Mavidis landed a crushing left hook counter that dropped Ojeda like a sack of potatoes. It was a miracle that Ojeda was able to get up and continue which prompted some quick witted fans in attendance to chant “Tyson Fury” as it was reminiscent of Fury arising from the near dead to finish his fight last weekend against Deontay Wilder. Ojeda’s luck would be short lived however because just moments after action resumed, he was being pounded on by Mavidis which prompted the referee to call an end to the bout. By way of knockout at 2:12 of the opening round, Mavidis wins his debut fight in impressive fashion.

In opening bout action, a scheduled six round super middleweight bout,, former amateur European Youth Champion, Andreas Katzourakis (2-0, 2KO), also from Athens, Greece, also now fighting out of Los Angeles, was winner by way of third round TKO over Christian Aguirre(8-5, 5KO). There was good two way action in the bout but after Aguirre took some hard shots, the referee called a seemingly premature end to the bout which Aguirre protested to now avail. Aguirre was coming off a knockout victory over an undefeated opponent but was denied an opportunity to fight on. 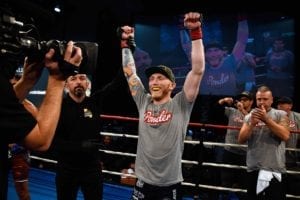 Attendance for Fight Club OC was 1,412, a sell out as it was for the five previous 2018 shows. Promoter for the event was Roy Englebrecht Promotions. Fight Club OC returns on Thursday, February 21st. For tickets visit www.socafights.wpmudev.host