It was KO’s from start to finish at the 46thedition of Roy Englebrecht Promotions’ Fight Club OC show Thursday night in The Hangar at the OC Fair & Event Center in Costa Mesa, CA.

In the opening bout 7-3 Christian Aguirre upset 8-0 Jose Alday Jr with a stunning 3rdround knockout. Alday was in control of the six-round bout until Aguirre cornered Alday in the corner at 2:00 of the 4thround and a combination to the chin had Alday out before he hit the canvas.

Than to finish the evening in the seventh and final bout Abel Sanchez trained light heavyweight Ali Akhmedov climbed to 13-0 stopping 18-14 Jovany Gomez with a brutal shot to the liver at 2:20 of the 1stround. 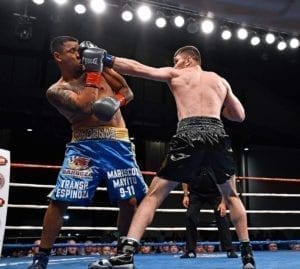 Other results before another sold out show of 1,287 fans, saw Leo Ruiz over Raul Calderson; Pomona’s Israel Mercado goes to 6-0 with a UD win over a very game Alfredo Hernandez who drops to 3-3; Fullerton’s Trent Meaux scored a UD over 2-3 Roy Cruz; Santa Ana’s Richie Palomino lost a very close split decision over veteran Ivan Castillo; and Jered Gwerder scored a 1stround knockout over Tyler Smith.